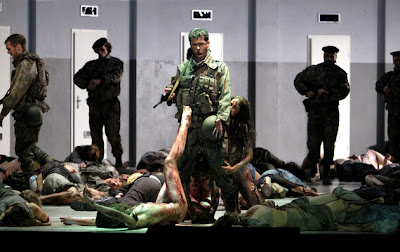 The Dresden Semperoper Macbeth is directed by Philip Himmelmann, also responsible for the excellent, though controversial Don Carlo in Berlin. His rather unspecific Macbeth concept seemed to evolve around Macbeth´s role as a soldier and leader of a paramilitary group located in a concrete tunnel with built-in doors serving as entry and exit points. If there was more to the production concept than this, I didn´t get it. Compared to his innovative Don Carlo in Berlin, this seemed rather tame.

Paolo Gavanelli is a competent, though by no means exceptional Macbeth, very static on stage and presenting a rather one-dimensional take on the character.
Nadja Michael as Lady Macbeth is vastly more interesting, but also highly problematic: Starting out as a mezzo-soprano, she switched to the soprano fach a couple of years ago, and her tone is now marred by a heavy vibrato, not present 5-6 years ago in the mezzo fach, where I remember her as an excellent Brangäne with Daniel Barenboim and the Chicago Symphony Orchestra in Carnegie Hall. A pity really, with this vibrato, since in almost every other way she is perfect: She looks fantastic, she´s very agile on stage and she is a great actress.

Of the supporting cast, Korean tenor Wookyung Kim as well as bass Georg Zeppenfeld were excellent as Macduff and Banquo, respectively.