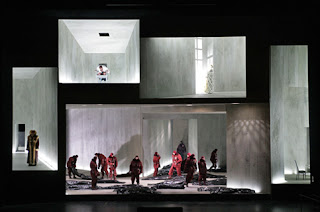 Mussorgsky´s Khovanshchina is a favourite opera of mine, for strange reasons not staged very often. Or perhaps the reasons are not that strange: It is in Russian, there are no heroes or heroines, no love story and it is very long..But the music is some of Mussorgsky´s most beautiful and the plot focuses on universal themes such as the struggle for power and the conflict between religion and power.

A new production, like the present by Dmitri Tcherniakov at the Bavarian State Opera is not something which happens every season. Or even every fifth season.

In the very interesting young Russian director Tcherniakov´s staging the focus is on the conflict between Zar Peter (who does not appear in the opera) and The Opposition consisting of autonomic warlords (primarily the Khovansky´s). With the superimposed conflict between the old faith (Khovansky and the priests) and the new faith (Zar Peters supporters).

The set consists of 5-6 vertical rooms, where the main characters go on with their life, whether actually singing or not. In a naked concrete set-up the name of each rooms inhabitant is written with laser at the beginning of each scene.

In brief: The staging is no less than brilliant. Rarely does a director succeed in bringing new insights into heavy subjects such as the nature of power and organization of society as Dmitri Tcherniakov.

For the right bass, Ivan Khovansky is a fantastic part. The late danish bass Aage Haugland (on Claudio Abbado´s recording) brought an unsurpassed ominous stage presence to the part, at times yelling more than singing, which suits this role fine. I wonder if this is something René Pape would ever consider? Realizing the part is too low for him and on paper not suitable for his voice at all, I am nevertheless convinced he would make a smashing Ivan Khovansky.
Here at the Bavarian State Opera we have Paata Burchuladze, who is way past his rather short prime which seemed to occur more than 10 years ago. Though he brings a certain refreshing sophistication to Ivan Khovansky, vocally he is anything but fresh.

On the other hand Klaus Florian Vogt as his repulsing son Andrei was in excellent voice with the air of a crazy serial killer.
Anatoli Kocherga was very strong as Dosifej, and also Doris Soffel convinced as the young widow Marfa, who for strange reasons is in love with Andrei Khovansky despite his cheating on her and trying to kill her...

Kent Nagano is conducting, a bit too passive for my taste, though no less than competent. Again the inevitable comparison is with Claudio Abbado, whether fair or not. But Dmitri Tcherniakov is definitely someone to watch out for in the future.

Photograph from http://www.staatsoper.de/ (Bayerische Staatsoper 2007)
Posted by mostly opera... at 22:40