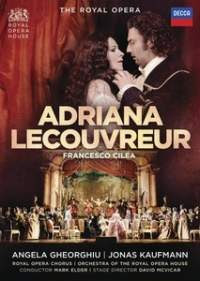 When David McVicar´s new production of Adriana Lecouvreur opened in 2010 at the London Royal Opera, a substantial part of the criticism seemed to focus on the qualities of Cilea´s work, expressing disappointment that Adriana Lecouvreur is not that hidden master-piece that some, for inexplicably reasons, thought it was. Since Adriana Lecouvreur premiered in 1902 it has been in and out of favour (mostly out though), depending mainly on the desires of one the days great sopranos to take on the title role. A title role famous for both dramatic demands as well as a reasonably low tessitura, making it ideal for divas nearing retirement.
Now, thus, Angela Gheorghiu has been a driving  force behind this production and what a pleasure it is to hear a voice still in it´s  prime for this part. And as the diva on stage, she seems more or less to play herself - as always one might say - but here, it really does suit the role almost to perfection. Agreed, the vocal dramatic demands of the role may somewhat exceed her capacity, but personally, it is something I care very little about in a production, where she embodies the character to a greater degree than almost everything else she has done on stage.
And then there is Jonas Kaufmann as Maurizio and he is quite simply perfect, playing what he does best: The ultimate romantic hero.

The third key component to this DVD, which I honestly believe will not be bettered in my lifetime, is David McVicar, creating a quite traditional production, centered around a baroque theater. No advanced interpretations here, but in this case this is exactly what this verismo thriller needs: Beautiful sets, straight-forward story-line and...perhaps most importantly, detailed direction of the singers. Even an infamous non-actress as Olga Borodina seems well into her character as well as still being vocally in her prime. Particularly the character of Maurizio is well developed from McVicar: Perhaps not at all the perfect romantic hero you´d initially thought he was, but one whom you may suspect of a second agenda. And then the always reliable Alessandro Corbelli - a real find as Michonnet.

Mark Elder does what he can. Admittedly Cilea was not a great orchestrator, but if one takes the work at face value, this DVD is very entertaining.