Renée Fleming is Arabella in Paris 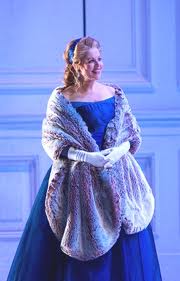 
Renée Fleming obviously has reached a level where she can chose which directors to work with, apparently preferring to work in stylish, minimalistic production straying not too far from the libretto. Thus a couple of years ago she was a quite superb Cappriccio Countess in Vienna in a production of Marco Arturo Marelli, also behind this new production of Arabella at the Bastille Opera in Paris. Here, however, she was somewhat  less than superb and her performance underlined an evolution, which has become increasingly visible in her performances during the past years, at least in Richard Strauss operas:

First of all Renée Fleming is definitely not in her vocal prime anymore. Much of the bloom of her top register has gone, and her middle register, by some still called creamy, is far from creamy now with a timbre, which simply does not appeal to me.

Secondly, I have some issues with her performance style. Some call it mannerisms. In my native Danish language there is a very good word for it, which directly translated read affected. Affected language, affected acting. Renée Fleming may aim to communicate sophistication, as she applies the same style with her Marschallin in Rosenkavalier, however ultimately she portrays Arabella as a superficial character. Which, on the other hand, is a valid interpreation, of course, if not the libretto and music suggest otherwise.
She was audible, but not audible enough for me to actually distinguish the words she was singing.

However, however...for those not familiar with Renée Flemings previous vocal status, and even for those well familiar with it, it is easy to understand why she is admired and received huge ovations here: She has a firm grip of Straussian style and first and foremost she has a distinctness to her performance that really does make her stand out. On a technical point, some may find her use of portamento excessive, though personally I do not mind.

And finally, despite my reservations about her voice, she is still among the very finest around. Who today, can perform a finer Arabella? Adrienne Pieczonka in Vienna a couple of years ago was rather superb. Anne Schwanewilms undoubtedly also. But else?

Michael Volle, on the other hand, I don´t have any reservations about. He was simply superb, vocally strong, a straightforward and engaging stage actor, convincingly portraying Mandryka as a sincere man unfamiliar with the sophisticated Viennese way, but thankfully without the overacting often seen. Several of his scenes were in fact unusually moving.

No reservations about Julia Kleiter neither, a clear and pure voice, almost overpowering Renée Fleming at times. Just as fine as her Zdenka on the 2007 Zurich Arabella DVD, alongside Renée Fleming as well.

Despite fine singing I have always found Joseph Kaiser, a bit indistinctive as a performer. Here as well. Finally Kurt Rydl and Doris Soffel were feisty as the elderly couple.

Philippe Jordan conducts Arabella like it was Elektra, emphasising the contrasts and highlighting the darker thematic elements of the score to a degree I haven´t quite heard before. 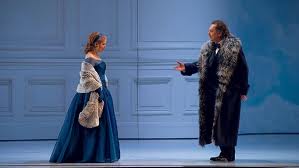 Pieczonka and Schwanewilms, of course... But some others could try or re- try it... Kaune, Serafin, Isokoski, Denoke... And why not Harteros? Anyway, I don't want to look obsessed about Fleming... I don't like this voice (I am not a Gruberova fan either or even a Schwarzkopf fan...) and that's all. And I am ready to admit ( answering to Marcillac ) that Fleming in her best may be better than Janowitz in her worst... I only regret not having the luck to experiment her best ( even her first recording, Rosmonda d'Inghiltera, is not convincing...but it is Donizetti).

Thank you for your comments about the Paris Arabella!

Renée Fleming at her best would be, imo, some of her recordings in the late 90´s, there is a disc with Schubert lieder where she is in glorious voice (accompanied by Eschenbach). Also her Strauss heroins disc from this period. The Otello DVD, the Rusalka, both on CD and DVD. Here you really hear the beautiful creamy quality of her voice.

This, for better and worse, is as comprehensive, accurate and fair description of the current state of Fleming vocally and artistically. If I would dissent slightly it would be to say, at its best, at least as hear in the Met Capriccio last spring, the voice retains a "creaminess" that is equal or superior to what you may usually get at even the big houses in this repertoire. This "creaminess", however, was hear in only 1 of 2 performances attended and so certainly cannot be compared with what was on offer from Fleming even 5, much less 10, years ago.

I'm scheduled to see her in Rosenkavalier in Munich next month and possibly in Otello at the Met next fall so we shall see. One has to be somewhat skeptical of the Lohengrin scheduled for Vienna in 2014.

I don't think NV and I are going to agree on Fleming but fwi I do think at her best she could be better than a Janwitz or Della Casa at something other than their very worst but I'll concede there general superiority.

I am anything but a Gruberova enthusiast though I do force myself to appreciate her remarkable technique. Schwarzkopf can certainly be very problematic in some contexts.

I think the CDs mentioned by Mostly do provide a very good representation of Fleming in her prime but I do not think she has been invariably well served on audio and video. I heard her for the first time as the Figaro Contessa (first time, period) in February 1994 but found her Glyundebourne DVD of the same role from the following summer disappointing. By the same token, her Fiordiligi was (imo) magnificent at the Met in December 1996 but disappointing on the Decca CD. Her Decca and Met Donna Annas also inferior to her Anna at Salzburg in 2000.

Generally, it is very unfortunate the she was not recorded in more full Strauss, Verdi and Mozart in the late 90s and early 2000s (up to, say, 2004, when some deterioration became noticeable).

As to the other ladies mentioned Harteros is of course the big one, the mistress of this repertoire now and at least the equal and probably the superior of Fleming at the same age. Soile Isokoski never had quite the vocal or physical glamour of Fleming but she was rather close in the former, had (has an even better technique) and, as heard in 2010 (Rosenkavalier, Figaro ) her vocal sheen is almost undiminished form 15 years ago and at this time, imo, superior to Fleming (I hope to hear her in Rosenkavalier next November).

Finally, I'm afraid I have not heard Serafin at her best. People for whose views I have the greatest respect, including Mostly, think very highly of her but in my few experiences with her, including a Vienna VLL a couple of months ago, there was serious constriction at the top, a thickness and grayness of tone and serious running issues. Again, my live experiences with her have been very limited.

I saw Isokoski at the Met a few years ago as Marguerite, and, frankly, thought she was dull as dishwater. OK voice, but zero stage presence and charisma.

Other than the Marschallin, what Strauss has Harteros done? She seems to be concentrating more on Verdi.

I do agree about Fleming's deterioration, but to say that Harteros is superior to Fleming at the same age completely mystefies me - Harteros' technique is remarkable, but interpretively she is far far less interesting than Fleming who in that Strauss heroines disc reaches heights of interpretation in Strauss that have not been matched since Schwarzkopf. And what grounds do you have for saying that Isokoski's technique is/was better? Fleming's mannerisms did get more extreme in the 2000s, but these were interpretive choices, not technical deficiences - in terms of a superb legato, breath control, support, placement, use of resonance, colouring the voice, even sound production across the three registers, a beautiful sound at any volume and at any pitch, and actually being expressive with the coloratura - in all these aspects I would say Fleming was Isokoski's superior. Both are now past their prime - I'm talking across both careers. I do very much like Isokoski, and this is not to berate her in any way, she is also superb, but she just doesn't quite strike me as an artist of the same stature.

Do you happen to know if there are bootlegs of any of the Fleming Mozarts you mention that you say are better than the released versions?