Carmen at The Met 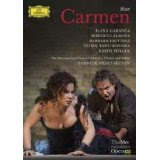 Last time The New York Metropolitan Opera presented a new production of Carmen was in 1997, directed by Zeffirelli with Waltraud Meier as Carmen ("it was the most horrible time in my career"), and Angela Gheorghiu ("that wig goes on stage with or without you") as Micäela. This time around, Angela Gheorghiu was originally scheduled as Carmen, but withdrew allegedly due to private problems - i.e. her separation from husband Roberto Alagna - as of now (2012) they seem to be together again though. However, so-called "dramatic issues" also played a part in her cancellation. Understandably so. As Carmen you´d need a vocal heft, particularly in the lower register, that Gheorghiu simply does not have and furthermore in a house the size of the Met..not an obvious recipe for success, I´d say.

The current production opened on New Years Eve 2009, directed by Richard Eyre, who chose to update the story to the 1930 Spanish Civil War, thus emphasizing the political context of the piece - i.e. underlining the inherent conflicts between soldiers and townspeople. The sets are relatively simple and the story is told in a straight-forward manner. Perhaps not overly exiting or inventive, but a staging which will satisfy most audiences, not an unimportant consideration for an production which is supposed to fill the house regularly with everchanging cast members for the next 10+ years.
The replacement for Angela Gheorghiu was Elina Garanca, a vocally superb, though cool Carmen. There are simply no other mezzo-soprano today with the same beautiful even tone throughout the entire register. At no point was she strained. Some may lack a bit of wildness and spontaneity, but this is just not Garanca´s style. Garanca portraits a woman in the 1930´s, who is definitely not a vamp, but a calculating woman. As such it is difficult to fault her something. Those wanting more wildness may look forward to seeing Anita Rachvelishvili when she appears in the same production in the 2012-13 season.

As for Roberto Alagna, he really does seem to have a vocal renaissance in these years. Don José is a good part for him. If I sound less than completely enthusiastic it is simply that I have never really taken to Alagna´s style. But he does what he always has been doing, and better than in a long time as well.
Barbara Frittoli´s vibrato unfortunately has widened quite a bit the last 4-5 years, but her appearance as Micaëla is wonderful. Teddy Tahu Rhodes replacing an ill Mariusz Kwiecien with three hours notice, looks great, but vocally he does not really have the vocal qualities of a great Escamillo.
Points to Keith Miller as well for excellent characterization as Zuniga.

Yannick Nezet-Seguin is repeatedly mentioned as one of the favourites to take over after James Levine, when the latter officially resigns (these years he is barely conducting due to protracted health problems). And why not? He is a fine conductor, delivering a colourful and dynamic interpretation of the score.

For many, this could be a first choice. Alternatively, for a bit more sparkle between the protagonists, look for Jonas Kaufmann and Anna Caterina Antonacci´s 2006 version from London.