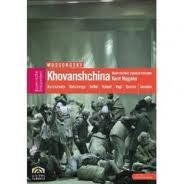 In brief: The best production I have seen from Dmitri Tcherniakov. And perhaps the best Khovanschina on DVD. Perhaps. But not all may agree.

I saw this production in Munich right after the opening in 2007 with a cast identical to the DVD and I still remember the skewed view from 2nd row, far left gawking at the stage vertically divided into several chambers, when characters not current in action or pivotal characters not directly present in the opera (such as Czar Peter) engage in secondary actions of importance to the stage drama.
The staging is highly political, as is indeed the opera, set around the 1682 Moscow uprising, but focusing on the struggle for power between various political and religious fractions. Sufficiently abstract to survive Tcherniakov´s update to a timeless desolate world dominated by sad concrete.
Much an ensemble opera, Doris Soffel as Marfa, the old beliver, a role truly requiring a deep contralto stood out together with the psycopathic eerieness of Klaus Florian Vogt, while Paata Burchuladze is way past his prime in the important part as Ivan Khovansky. I see now, that in my review of the 2008 performance I wished for René Pape to take on the role of Ivan Khovansky in the future. Now we know that he will indeed perform in Khovanschchina within a couple of seasons, but as Dosifey, leader of the old-believers.
In all unfairness, Kent Nagano is no Claudio Abbado, and his transparent, analytic approach does not really release this music. For some, and almost also for me, this may be reason enough to prefer Abbado´s DVD.
As for the DVD competition, no one comes even close to the  musical standards set for this work by Claudio Abbado in the 1989 recording from the Vienna State Opera, however a DVD is more than music alone and the Vienna production is rather uninteresting. If you can stomach the Vienna production, which is actually not that dull, this is the winner. The only alternative on DVD is the rather dull and unmoving Barcelona production.
The bottom line (scale of 1-5, 3=average):

The Rimsky version from the Bolshoi is around, dating from 1979 with Alexander Vedernikov as Ivan Khovantsky, Nesterenko as Dosifei and the as yet unmatched Irina Arkhipova as Marfa, under Simonov. Its wonderful production serves the opera and not a director's ego. -Then there's a post-modern mid '80s Shostakovich version with the Ravel-Stravinsky ending gleaming with voices Ghiaurov, Burchaladze as Dosifei and Kotsherga as Shaklovity, under Abbado. The Mariinsky has an almost identical production to the Bolshoi but is nowhere near as gripping. The tenor singing Andrei Khovantsky doubles as Golitsin. Then there's one with Willard White as Khovantsky. There are more but lunch beckons and as thieves took all my DVD players and recorder I can't tell who's on what. The Barcelona one is a real let down for some key singers seem to have colds.