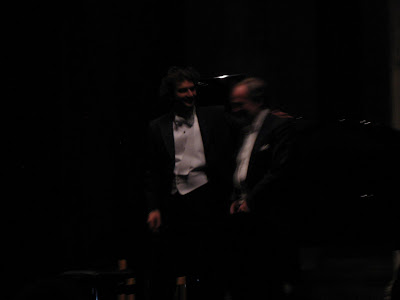 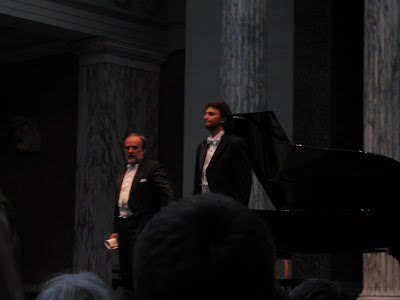 This liederabend in the context of the series of Helge Jacobsen concerts marked German tenor Jonas Kaufmann´s first performance in Denmark, which took place in the intimate venue all of the New Carlsberg Glypotek.

Jonas Kaufmann is naturally confindent and authoritative on stage. He clearly commands the language, emphasizing expression over beauty, telling the stories, not just singing the songs. Vocally, he has never been better. A dark tenor, but fully in command of the high registers, often sung in piano or with added sprechgesang when required.

As an interpretist, Jonas Kaufmann is of the straight-forward as opposed to the wringing-sentimental type. And thanks for that. Not that he does not add to or give of himself in this selection of songs starting out with Schuberts rather long drama "Die Bürgschaft" to be followed by a completely superb Dichterliebe. Superbly suited to Richard Strauss´songs, already proven on his earlier (read: before he became famous) highly acclaimed disc of Richard Strauss lieder, he delievered completely smashing interpretations, culminating with Cäcilie. Can these songs be performed better? I really do not think so.

Malicious voices have it that Jonas Kaufmann is about looks rather than substance. Do not believe them. He has everything. Is Jonas Kaufmann not the preeminent tenor on stage today? Does these things matter? Of course they don´t. But really he is.

My only quibbles on this rather superb evening included free drinks in the New Carlsberg wintergarden are directed towards a couple of practical issues, such as having the audience loudly scrabbling through endless pages of text and the omission of the world-class accompanist Helmut Deutsch from the programme. Who by the way with his incisive playing was a major contributor to this rather unforgettable evening, which I believe will be one of the performances I will tell my grandchildren about 50 years from now: When I heard the great Jonas Kaufmann in his absolute prime. And they will answer: Ah, but why are there no tenors around like him today?

And why was this concert not sold out? Well, perhaps because it was hardly advertised anywhere? However, already now rumours has it Jonas Kaufmann will be back in Copenhagen in 2010. Do not miss it. 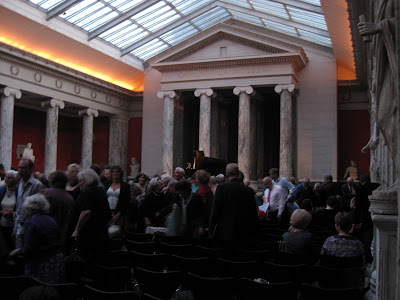 The LA with Jonas and Helmut are something else, aren't they? They make me wish they could go on forever...

I do truly envy you on this one:) He definately is by far the best performing tenor around. I've heard him some ten days ago in Manon, and I was completely blown away by his voice (before that, only as italian singer in Rosenkavalier). No recording does him justice and alive he sounds absolutely fantastic.

That's what he's good at, Liederabends. On the other hand, his take on the italian and french repertoire must be one of the major operatic letdowns.

@Dolcevita Have you ever heard him live?

Well, Dolcevita..maybe that's a letdown for you...hearing him singing Tosca's Cavadarossi in London is an unforgettable thing for me, the one I will told my grandchildren if I happen to have them and I think that is italian repertoire, isn't it ? ..it's just a matter of opinion.

He sang Alfredo Germont with Netrebko at Covent Garden about 14 months ago.

I managed to see one of the 3 performances she actually sang.

Overall I would say that he is very impressive - but I suspect people will say (and I think they did at the time) that he is not am "Italianate" tenor.

He is singing Don Carlos later this year which I think could be very interesting.

I wouldn't class Alfredo as Jonas's greatest role; especially not having seen his Don José and Cavaradossi amongst others

I guess dolcevita only listened to his CD Romantic Arias which is not the best, soundwise I mean. No dynamics, no delicate pianissimos on this CD. A much better sounding recording is the EMI Butterfly with Jonas as Pinkerton. I have seen him a lot of times live. He steals the show of any Tosca and Carmen, yes he steals the show of almost any soprano and mezzo around including Natalie Dessay in Manon Chicago.
I saw him in Tosca in Vienna on the 12th and the audience went wild applauding almost 2 minutes after “E lucevan le stelle”. The curtain calls lasted 10 minutes for just 2 singers and the conductor (who turned a bit shy after his only solo bow ;-)).
I also saw Jonas in Traviata, Don Carlo, Rigoletto and La Boheme aside of 3 German operas (Zauberflöte, Fidelio, Königskinder, he didn’t sing more German roles over the past 3 years :-)). IMHO the only singer who is able to rival Jonas Kaufmann is Jonas Kaufmann himself.
Jonas doesn’t have the voice of Pavarotti, thank goodness. Pavarotti had not the voice I prefer, matter of taste of course, but I also think that he was not able to express such true feelings with his voice as Jonas does.

Comparing Kauffmann to Pavarotti is pointless. Firstly their reprtoire barely crosses. Secondly their sound is totally different. Pavarotti (in his prime) had a superb, unmatched Italian tenor sound. His wonderful diction, open tone, sheer beauty of voice and control of dynamics make him irreplaceable in my opinion.
Kauffmann is a totally different voice type. He is dark-toned, dramatic and essentially Germanic. Nevertheless he still manages to be extremely impressive in Italian and French rep but I would guess that longterm his core rep will be the big German romantic roles.
It is possible to admire both these wonderful artists and appreciate their unique contribution to our listening pleasure and to operatic art.

Somebody ought to put this Curzon character out of his misery; is he the womble of the universe, or what? For anecdotal info: I also consider Pavarotti a redundant fatty!

Polsky's comment would be offensive if it wasn't merely ridiculous. "Womble of the Universe"? Does that make any sense whatsoever? Does Polsky even know what a womble is? For those not in the know a womble is a small (ficticious) creature that spends it's life recycling rubbish on Wimbledon Common! Ooh, how insulting!
On a more serious note, Polsky, if you want peddle your dubious views which seem to amount to "If I disagree with you, you should be shot" (nice to see Fascism is alive and well!!) I suggest you find a more appropriate forum. Incidentally you make yourself look even more ridiculous by negating a singer's artistry purely because they had a weight problem!

Womble of the Universe !

Now there is a title ! Secondly only to the Ackond of Swat in my book

And back to the topic that most people are posting about! Has anyone heard anything from the new Kaufmann album. It looks like a very promising line-up of repertoire.
Personally, much as I admire his Italian and French roles(and I will definitely book for his Don Carlo next season at the ROH), I believe his longterm repertoire will lie in the German and possibly Russian roles. I would love to hear him tackle Ghermann or the Kaiser.

Yes, where on Earth have you disappeared to? I do hope you are fine and simply too busy to post.

Where are you? Post something - we are getting worried.