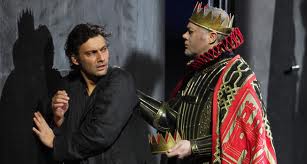 I see what you mean, as far as Anja Harteros is concerned. In about everything I see of her there's this lack of real emotional attachment. As if there's no soul behind it, no personality. It is really disturbing to me. Vocally she's top notch.

Welcome back. You keep taking long breaks. Can you write something about the situation at the Royal Opera in Copenhagen?

Hi! I agree 100% with your observations...and when it comes to Mr Kaufmann´s portrayal of don Carlo , this was the first time I could actually relate to that trouble character.

I agree with pretty much all of what you say Mostly and while Harteros was by far the best Elisabeth I've had the pleasure of seeing live she was as not as dramatically committed as might be ideal. However, I saw the January 19th performance in the theater and I thought she seemed more involved than in the livestream. I don't think her performance was that different but I was actually able to see her better in the livestream and the lack of commitment was more evident.

I would say that she has been very involved on several occasions I have seen her, specifically as the Figaro Countess in multiple performances, a superb Marschallin in Munich last summer and most especially in every way a riveting performance in the same role in Vienna last month.

and then comes her intonation problems - sometimes more obvious than at other times, but never entirely gone. In this DC she was actually not too bad, but in "tu che la vanita" she is somewhat off the mark. HOWEVER, just listening to Marina Poplavskaya´s Elisabette, who is entirely compelling as an actress, but absolutely no match for Harteros vocally, her (MP´s) aria is almost painful.

I do think the best thing I have seen Harteros do was Alcina in Munich probably in 2007, with commitment and all.

Btw I heard the Intendant of the Vienna State Opera say that Harteros was the best Marschallin seen in Vienna since Sena Jurinac, considering that everyone of note has sung that part there, that is no small praise for her.

for this to be released on DVD/TV it would have to filmed professionally, that was not the case, just barely good enough for streaming purposes.

Jonas Kaufmann is the best on earth:)

Well then it was stupid of the Bayerische not to record it, because a Kaufmann - Don Carlo DVD is NEEDED. Honestly, I find it quite silly that we have two Villazón DCs of varying quality and no Kaufmann yet. Maybe he should do it for the DNO: they seem to issue DVDs for any performance whatsoever.

Oh how much I'd love to see this on DVD!