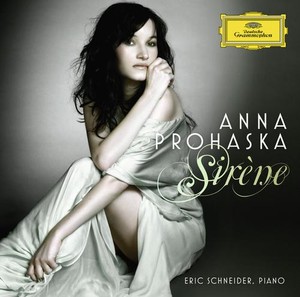 
She studied at Hans Eisler Academy of Music in Berlin and I remember when she graduated with maximum honours not more than a couple of years ago. Already as a student, she became a member of the Berlin Staatsoper, where I have heard her in various minor roles (such as the shepherd in Tannhäuser, a flower maiden in Parsifal) and in 2008 as a water nymph in Rusalka in Salzburg. Admittedly local Berliners gathered she was destined for stardom before I did, and only recently in Salzburg  did I hear her for the fist time in a leading role, as Despina in Cósí Fan Tutte.
And destined for stardom I am convinced that she is, perhaps more convinced than with any other soprano her age. Because not only does she have a beautiful voice - a very beautiful voice, with a wonderfully dark middle register and effortless top notes. But there is also something very technically solid about her singing, displaying a fabulous technique with completely even shifts between lower and upper register, and a style which at times is almost altmodisch resembling the style of Dorothea Röschmann.
The theme of this recital (hardly an enviable task having to come up with original themes for recitals) is Siréne, waternymph. Not that I´d immeditialy associate her voice with the fleeting spirits of a waternymph, but nevertheless she is outstanding in this program ranging from Purcell and Dowland over Schubert and Schumann to Szymanovski. Best perhaps in the classic german songs such as Schuberts Des Fischers Liebesglück.

I remember once reading an interview with Daniel Barenboim, a frequent collaborator of Anna Prohaska´s, stating that after 30 minutes of singing he would know if a young soprano was eventually destined for Wagner or Mozart. In the case of Anna Prohaska, I´d be curious to hear his opinion.

Not to be missed.

Hi Ms Opera (May I call you Mostly?)
First, it’s good to see you back on board, we've missed you.
Secondly, in my opinion you've got both Ms Prohaska and Ms Erdmann dead right. I've just had the good fortune to see both of them in recital at the recent Schubertiade at Schwarzenberg. Ms Erdmann prepared a fairly generic Schumann/Strauss program which she performed effortlessly and was very well-received. Ms Prohaska prepared a much more elaborately thematic program, based on ‘Ophelia and the lunar water nymph’ (excuse my bad translation of the German title) which was extraordinary, with music by Brahms, Szymanowski, Berlioz, Schubert and Strauss. It was a powerful and exciting performance, technically very difficult yet totally assured. She also looked stunning in what one of the reviews called ‘poison green’ gown. While both singers gave terrific performances, for me Ms Prohaska’s personality shone through and transformed the evening to one of the best of the entire festival. She is a very gifted young artist who takes her job very seriously, I have great hopes for her.

Thank you for your nice words and for your live report of these two singers. Very interesting. Looking forward to hearing especially Anna Prohaska in recital